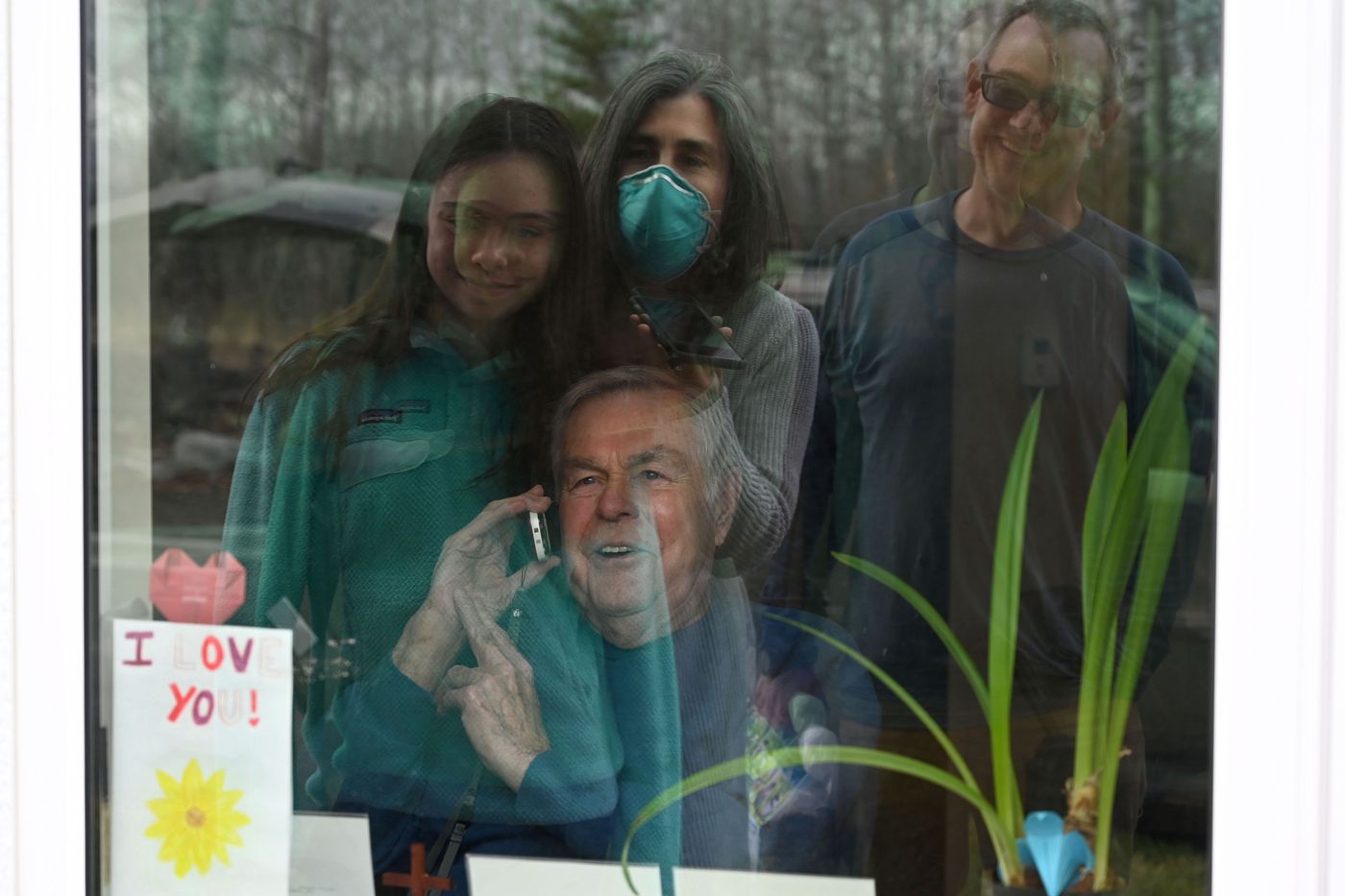 Visiting Dad, through the window, at an Anchorage nursing home on lockdown

Michelle Hensel went to visit her dad through the window on Wednesday, the only way she can in the pandemic.

Her husband pulled their car around to the side of Aspen Creek Senior Living Center, an assisted-living home that opened last fall in the industrial sprawl of Anchorage’s Dowling Road.

In the raw late-April chill, she and her teenage daughter Kaia got out of the car and stood in the fresh landscaping outside Richard Hensel’s first-floor window. The shade was already up, the cloudy April afternoon light streaming in. He’d been awaiting their arrival.

They unloaded a new bird feeder and got out their phones.

Richard Hensel is 90, a retired wildlife biologist who once managed the Kodiak National Wildlife Refuge and conducted pioneering research into Alaska polar and brown bears, a grandfather and prolific writer of newspaper letters-to-the-editor.

Despite dual leg amputations at age 87 due to vascular disease, he lived at home with his wife until January, when he moved into Aspen Creek.

He had been happy and busy there, working out with exercise bands and socializing with the staff and other residents. He’d even gone home some weekends to be with his wife.

Then came the coronavirus pandemic, which has exacted a terrible death toll on nursing facilities across the country. In mid-March the assisted living home went on lockdown. Visitors, including family, were no longer allowed inside.

Michelle, a family medicine physician who trains rural health care providers, understood her father’s vulnerability to the coronavirus and at first thought about pulling him out of the facility.

But the Aspen Creek staff took precautions early, and seemed diligent and serious about protecting residents. She started to think her dad might be safer there than if he went home.

So he stayed. And Michelle and her family adapted, as thousands of other families have, to strange and distant ways of connection, like window visits.

On Wednesday, her father peered out at his family. He’d taped a sign made by one of his granddaughters to the window, facing out: “I Love You,” with a flower drawn in yellow marker.

“There he is,” Michelle said, her mask reflected in the window.

Father and daughter fumbled for a moment with their phones, trying to call each other. Michelle put the phone on speaker.

“How’s life on the inside?” she asked her father through the glass.

“It’s really good,” said Richard, who has twinkly eyes and a full head of silver hair.

They talked about his morning newspapers — he had taken a stack to be recycled at the front desk, only to learn the facility didn’t recycle. Michelle offered to do it. A shopping list of items he wanted.

“Along with a little box of wine.”

“Not yet, but aren’t they letting you go outside yourself for a little bit?” his daughter asked.

He’d been out that very morning -- after two geese had walked right up to his window.

Richard said it took him three minutes to circle the grounds in his electric wheelchair.

The topic shifted to birds.

His son-in-law Robb Reeg, also a family physician, pulled out a new bird feeder from the car and began digging it into the fresh landscaping bark. Two other bird feeders hung from a spindly willow tree in the landscaped bark just outside Richard’s window.

They talked about how one of the chefs at the facility moved into the building. How staff were having their temperatures taken before their shifts. How, like almost everybody, Richard said he was, at this point, in serious need of a haircut.

“How’s my little girl doing here?” Richard said to his granddaughter Kaia Reeg, 14. And how was her sister, Malia?

The kids were fine, all things considered: Doing their schoolwork, going on runs. Playing violin. Kaia had gotten her learner’s permit, a step toward a driver’s license.

The conversation was winding down. They each hung up.

Michelle said she was going to drop off a bag with apples, the wine and the dental floss at the front desk.

For Michelle, talking to her father this way, with a cellphone on speaker and a pane of glass between them, feels distant and incomplete. Like watching something on a screen rather than living it.

But it’s what they’ve got right now. And it’s so much better than not seeing him at all.

This article was published Wednesday, April 22, 2020 on Anchorage Daily News